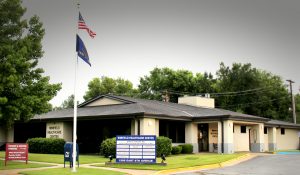 Health and the Cancer Center of Kansas celebrated 15 years of caring for patients at the Winfield Cancer Center.

Construction crews broke ground on the Winfield Cancer Center in October 2000.  The project represented a considerable addition to the Winfield Healthcare Center, originally built in 1994. Via Christi’s initial investment in the project was nearly $1.8 million. That money was used to purchase the linear accelerator and to construct the special vault to house the equipment.

Under a unique arrangement formed in 2000, William Newton Hospital contracts with Via Christi to provide outpatient radiation therapy services. Additionally, the Cancer Center of Kansas leases space within the facility for the provision of chemotherapy services. The Cancer Center of Kansas had operated a satellite clinic in Winfield for 10 years prior to moving to the Winfield Cancer Center in 2001, but the move to the new location created added convenience for patients who regularly have lab work done at William Newton Hospital.

Located on the hospital campus at 1305 E. 5th Avenue, the facility was completed and an open house was hosted in June 2001.

Since then, thousands of patients have accessed cancer care services at the Winfield Cancer Center.

Previously patients had to commute to Wichita up to five days a week to receive radiation treatment—which for many was a daunting interruption to their daily lives. The Winfield Cancer Center brought specialized care closer to home, creating a more convenient option for treatment.

“I would drive up, park, go in and have my treatment and be back to work 10 or 15 minutes later,” said Winfield business owner Jeffre Crow in describing his experience receiving radiation treatment at the Winfield Cancer Center.

“For what I was going through, I actually had a very positive experience.”

Crow has been cancer-free since his surgery in December 2014.

“Their foresight and leadership created an access point to highly specialized cancer treatment which has made all the difference to those in our community who are impacted by cancer.”

The Winfield Cancer Center can provide radiation oncology services to as many as 30 patients per day five days a week.

“We replaced the linear accelerator in December 2010 with the current model and updated our patient information system to paperless,” said Mitch McKee, Manager of Via Christi Radiation Oncology and CyberKnife in Wichita.

“With the exception of CyberKnife, we can treat patients in Winfield just as they would be cared for in Wichita and in doing so can remove the added burden of a commute, depending on their diagnosis.”

“Patients get to keep their local doctor while working with our specialized oncologists and we help them maintain their routine of life as best as possible,” said Groene, who serves as the Team Coordinator for the Cancer Center of Kansas’ Winfield clinic.

“Also, our staff live locally and we take pride in caring for our community.”

“It’s important that area residents understand the services and specialized care they can access locally,” said Quinton. “We’re not just celebrating 15 years of a building being open, we’re celebrating the difference this level of care continues to make in our community.”