KWCH and Catch It Kansas features CCK Patient and Son 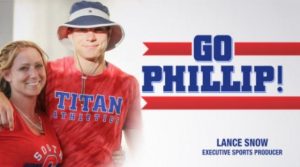 Dorothy and Phillip Landrum; Photo Credit to Lance Snow of Catch It Kansas

Dorothy Landrum, a patient of CCK’s Dr. Mattar, and more importantly, a young mother to a talented athlete in Kansas, is giving her son a reason to never stop fighting.  Dorothy has made plans to watch her son, Phillip Landrum, in every track race… “as if it were her last”.  This mother was diagnosed with Stage 4, inoperable breast cancer near the end of 2016.  Her journey has consisted of chemotherapy and several surgeries… leading to her first defeat of the disease.  Unfortunately, it’s back now and she has begun her second fight for her life.  She’s in it to win it though, once again.

As for her son who is currently a junior at Wichita South, he takes the life lessons his mother continues to show him about never giving up and pushes himself to be better.  Phillip, who knew little to nothing about track before his sophomore year, has now risen to be one of the state’s top sprinters.  He has been spoken about by his high school coach, Cody Dickman,  as having “athletic maturity beyond his years” in a recent interview with Catch It Kansas (the article is available in its entirety below).  With encouragement from the sidelines of his strong-willed mother, he continues to strive to be a better athlete.  “Every time I lose, I think about my mom.  She does all this stuff to win. She does all this stuff to get through,” Phillip said in the interview.  This duo feeds off of each other and pushes one another to stay determined to keep fighting, to keep pushing.  If there is one voice in his head and on the sidelines that truly comforts and energizes him all at once in order to compete at his best, it is his very own mother, Dorothy’s.  “Go Phillip!”

When given the opportunity to share her story, Dorothy generously expressed her gratitude for Dr. Mattar and the CCK staff by stating, “We owe a part of this to you.  Thank you for all you have done and do for us.”  But it is this mother and son duo that inspires everyone at CCK.  We are proud to be a part of this mother’s journey, and so many like her.

Click the link to view the full story on Catch It Kansas: http://www.catchitkansas.com/content/news/Go-Phillip-414814833.html

Important Notice Please take note that over the coming weeks, CCK will be transitioning to an updated electronic medical record system in order to better serve our patients. Thank you in advance for your patience and understanding with our team as they manage this change while continuing to care for you.
X